First & Foremost - A Happy Friendship Day to you ! 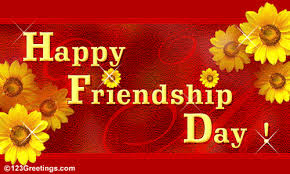 Business and commercialization of Friendship Day

These days, Friendship Day is celebrated with a lot of fanfare and great expenses. Just as in US and several other countries, the festival has been greatly commercialized.

"Your friend is the man who knows all about you, and still likes you."

"True friendship is like sound health; the value of it is seldom known until it be lost."

"Each friend represents a world in us, a world possibly not born until they arrive, and it is only by this meeting that a new world is born."

"My friends are my estate."

"A real friend is one who walks in when the rest of the world walks out."

"A friend is someone who is there for you when he'd rather be anywhere else."

"A friend is someone who knows the song in your heart, and can sing it back to you when you have forgotten the words."

"A friend is one who believes in you when you have ceased to believe in yourself."

"A hug is worth a thousand words. A friend is worth more."

"Everyone is a friend, until they prove otherwise."

"Every person is a new door to a different world."

"It takes a long time to grow an old friend."

"I get by with a little help from my friends."

"Two are better than one; because they have a good reward for their labour. For if they fall, the one will lift up his fellow: but woe to him that is alone when he falleth; for he hath not another to help him up."

"Two may talk together under the same roof for many years, yet never really meet; and two others at first speech are old friends."

"Friendship is unnecessary, like philosophy, like art... It has no survival value; rather is one of those things that give value to survival."

"I might give my life for my friend, but he had better not ask me to do up a parcel."

"Friends are the most important ingredient in this recipe of life."

"The better part of one's life consists of his friendships."

"The love of my life is the love between friends."

"One's best friend is oneself."

"A Friend is someone who knows all about you and loves you anyway!!!"

"To be depressed is to be lonely; to have a friend is to be happy..."

Friendship is like a perennial river which flows forever. It may change it's path but will never ever dry up.