Three bomb blasts were reported in Mumbai on Wednesday evening in the crowded Dadar, Opera House and Zaveri Bazar areas 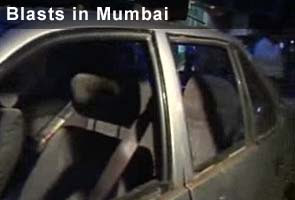 Loaded onto a truck, victims of the Zaveri Bazaar blast are rushed to GT Hospital

A car is seen damaged at the site of a mumbai bomb explosion in the Dadar area of Mumbai  [Source: Reuters]

In this Mumbai bomb blast photo taken with a mobile phone, injured people lie on a street at the site of an explosion near the Opera House in Mumbai [Source: Reuters] The bus stop where the blasts took place is on the left. A device was reportedly left in the electric meter box close to it. Videos of the Mumbai Bomb Blast