Congressional Research Service ( CRS)), the US Congress's bipartisan thinktank for legal and political analysis, has warned has recently released a report called Pakistan's Nuclear Weapons: Proliferation and Security Issues, on the Pakistan's Nuclear Programme, threats and tension between India & Pakistan. According to the report 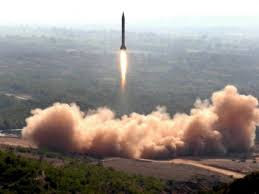 Earlier:
India and Pakistan nuclear race has never been worse. The following statistics will tell you why: