Sysomos analyzed 600,000 fan pages on Facebook and came up with the following distribution curve: 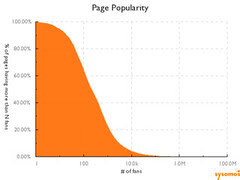 And once you have achieved a large base of users, they will help perpetuate popularity. According to Sysomos, pages with more than one million fans have nearly three times the owner-generated content as the average Facebook page. But pages with that amount of fans have the benefit of active users as well — bringing in nearly 60 times as much fan-generated content as the average Facebook page.

And frequent posting doesn't do much to help a page's popularity. On an average Facebook Page, administrators create one wall post every 15.7 days. On pages with more than one million fans, a wall post is created for every 16.1 days.
Email Post