According to Wall Street Journal, In the first three months of 2009, the English-language Wikipedia suffered a net loss of more than 49,000 editors, compared to a net loss of 4,900 during the same period a year earlier, according to Spanish researcher Felipe Ortega, who analyzed Wikipedia's data on the editing histories of its more than three million active contributors in 10 languages. 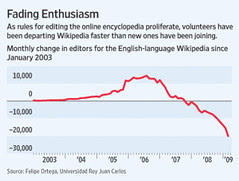